I’m a huge TV fan and I thought I’d compile a list of great TV shows you should be watching or should’ve watched while they were on air. Now this list is going to be hugely biased as it’s just going to be made up of my favourite TV shows but still I must watch them for a reason and I suggest you give some of them a watch.
So in no particular order:

You all knew this would be on the list and if you didn’t shame on you. It’s the worlds longest running sci-fi show for a reason you know. With engaging story arcs, interesting characters and just the fact that it’s British makes for great viewing.

Game of Thrones is just explicit in every sense of the word. With heavy violence and full frontal nudity Game of Thrones definitely isn’t for the squeamish. With it’s array of talented actors/actresses and the fact that you just don’t know who’s going to die next Game of Thrones will definitely pack you a hefty sucker punch.

One of Britain’s highest rated shows. Mostly praised for it’s writing and with Steven Moffat at the helm this is only to be expected. Just the fact that it has Benedict Cumberbatch and Martin Freeman in the main roles should make you want to watch it. It’s unusual format of 3 1hr30mins episodes a series means every episode is like a feature length movie and is highly rewatchable. Sherlock will truly leave you stunned and scratching your head.

Haven’t watched all the episodes yet but if the reviews are anything to go by then I am definitely in for a treat. A political drama about a man who vows revenge for being overlooked as Secretary of the State. With Kevin Spacey in the lead role this show is bound to garner some praise. A Netflix original series means you don’t have to wait a week for the next episode, every episode is released at once meaning you can watch the whole series in one day if you wanted to.

Another entry from HBO but then again it is HBO. I don’t know if many of you know about this show but it stars Matthew McConaughey and Woody Harrelson and is essentially about the hunt for a serial killer. The show has been put on par with the likes of Game of Thrones and Breaking Bad so definitely deserves a watch. It’s use of multiple timelines makes it a series like no other.

Broadchurch was highly popular in the UK and with good reason. It follows the tragic death of a young boy and adapts the whodunnit storyline. Normally you can kind of guess who done it before it is revealed but Broadchurch will truly shock you with it’s revelation. One sequence in particular deserves praise and just completely sums up Broadchurch. Lets not forget David Tennant and Olivia Colman who both offer great performances. The fact that the US are producing a remake and actually using Tennant is a testament to Tennant himself and the show.

The Walking Dead is perhaps one of the biggest shows on TV right now. Both highly popular in the UK and US the zombie drama will take you to places that no other show has taken you before. It has completely reinvented the whole zombie aspect and is not just about blowing zombies heads off. It has an array of engaging characters with their own back stories and the way in which each character is developed is done with precision. The show does have it’s highs and lows and has arguably slacked off in recent seasons but is still a show I feel needs to be watched and appreciated.

I am so annoyed about the lack of people that know about The Blacklist. It is definitely the show on air now that I’m enjoying the most. It adapts a story of the week format which means it doesn’t have these slow paced episodes that is just all build up. It has a number of twist and turns that you would’ve never seen coming and James Spader is just too badass. I liter
ally have nothing but praise for the show and if there’s one show from this list that you should watch let it be this one. You will not be disappointed.

I didn’t watch Prison Break when it aired but instead a few years later at the insistence of a friend and thank the Lord I gave in. After watching the first episode I was heavily disappointed but boy does it pick up. The title is pretty self explanatory to what it’s about. I didn’t know they could drag out the same concept for four seasons but they did. I think the fact that I watched it all back to back heightened my experience and probably would’ve enjoyed it less if I had to watch it week after week. It probably has one of the best characters on any TV show because he is just too damn “sick”. Watch it, and you’ll know what I’m on about.

Another “whodunnit” or shall I say “who’s doing it”. Doubt many of you know about Harper’s Island but it was a series I really enjoyed. I guess I’m just a sucker for the “Whodunnit” format, especially when I have no idea of who it is. It’s basically about this group of people who go to an island and get killed off one by one with some gruesome murders. What’s not to love eh?

Heroes was massive when it first aired and with good reason. I mean we’ve all dreamed about having super powers right? Heroes adapted a large ensemble cast and had numerous storylines running at once which all converged in the finale. A format which a lot of American shows adapt these days, but I think Heroes does it one of the best to be honest. With a new miniseries recently being announced it may be a good idea to watch it now. Although Heroes does drag the finales are definitely a good pay off and keeps a high level of consistency.

First of all forgive the name. It has nothing to do with Justin Bieber. A new show by the one and only Alfonso Cuaron, so it must be half decent. I don’t quite know what it is but this series just feels different to any other TV series It’s about a girl with special abilities who must be protected by a death row inmate. So already it sounds pretty intriguing. Johnny Sequoyah (that’s a girl) gives a great performance as the lead character Bo. Her childlike nature but the fact that she knows more than anyone around her is a great juxtaposition and one that is articulated well throughout the series.

Top Boy is just so quintessentially British and is highly popular especially among people my age. It depicts the lives of “gangsters” in London and their dealings with weapons, drugs and rival gangs. I think what makes Top Boy so great is the fact that it doesn’t hold back. Whether it is a true representation of life in London, I don’t know, but it definitely makes for good television. People being buried alive and kids being thrown from balconies Top Boy has it all. 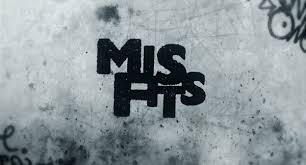 Misfits is basically Skins meets Heroes. It follows the life of a bunch of young adults on community service and the use of their special abilities to get them in and out of trouble. It recently aired it’s last series which was heavily disappointing but I choose to remember the show for its first 3 series which were just fantastic. What gives Misfits that slight edge and “pizazz” are the honest performances given by it’s main cast and it’s humorous undertone.

Damn Luther. I have no words. Actually I do. Crime Drama with Idris Elba as a mad detective. You should already be trying to find links to watch it. If not what more can I say? He dangled a man from a damn balcony to get info from him. Isn’t that enough. Men putting their hands in blenders, nah I can’t cope. Let me go watch it now actually. It’s on Netflix and LoveFilm so you guys have no excuse. It probably has two of the best characters to ever grace British television and there could be a film in the works so I suggest you jump on the bandwagon.

Probably a surprise for most of you. But yeah I dabble in children’s television sometimes and the Dumping Ground can be just as a appealing to adults as it is to children. It deals with some pretty interesting topics and when there are kids falling of roofs and getting run over and playing with grenades you know this isn’t just any kids show you’re watching.
Other shows that I have not watched myself but heard good things about include:
Breaking Bad
The Sopranos
Arrow
Six Feet Under
Dexter
House
Suits